Scarlett Johansson bowled over by Bono 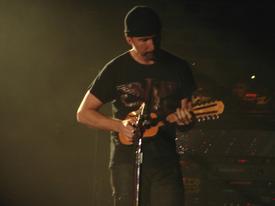 Human rights honour given to U2

Regular readers may remember an earlier story here on U2log.com where we said we had learned Bono had recorded a speech to introduce Bob Geldof at the Meteor Awards. It now appears our information was slightly off mark – it was the NME Awards (February 23) the speech was used at and Geldof was there to accept an award for the Live 8 DVD. Bono’s speech made the news earlier this month for being riddled with profanity. We haven’t got video evidence for you yet, but here’s a transcript – not for the faint of heart:

Presenter: “Now to introduce our next winner we have a special guest, live via satellite orbitting his own ego…”

Bono: “You see, different people have differing abilities to get across the drama, the tension, the percussive qualities of the word ‘fuck’. I’ve tried, but I’m but a student. I’m not fit to touch the hem of this master of the word ‘fuck’: my friend Bob.”

“You see, from his lips it’s onomatopoeia, it’s a poetic device, it’s tragic comedy, it’s violence AND compassion. Bob Geldof has told me to fuck off perhaps hundreds, maybe even thousands of times. The same for Richard Curtis, the same for everybody in Make Poverty History.”

“”Fuck fuck, fuck fuck. Fuck fuck fuck off,” he said. I’m so very pleased that upon asking Bob to do Live 8, we did not listen when he told us to fuck off. And I hope he is too. Because a cheque worth 50 billion dollars has been signed for the poorest people on the planet. Signed but not cashed. Every time somebody buys one of these Live 8 DVDs we’ll put pressure on the politicians to cash the cheque. Thank you very much for this award. And to my friend who is picking it up in all our honour:… Fuck. Off.”

… pet peeve: they never get the accent right. Generic ‘Irish’ doesn’t quite fit.