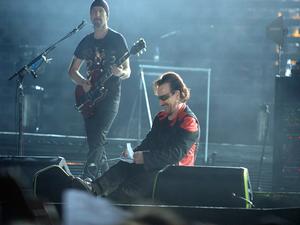 U2 played their first show in Buenos Aires in 8 years on March 1. This show was special because it reacquainted the band with their Argentinean fans, and also because the show was filmed using 3D technology. An army of cameras was seen in the stadium, including a crazy one flying over the heads of the audience inside the ellipse. A helicopter flew over the stadium the whole night taking aerial footage.

The concert began with “City of Blinding Lights” and Bono wearing a jacket made with the Argentinean flag. During the “Elevation” intro, everyone in the ellipse held up signs that read “We Missed You,” shocking the band. Bono asked to be handed one of the signs and told the audience, “We also missed you.” Then he folded the sign to form a plane, began to sing the song, and when he pronounced “E-le-va-tion!” he threw the plane into the air. The lyrics to “Beautiful Day” were modified, citing Argentinean locations:

See the world in white and blue
Buenos Aires right in front of you
From the Pampas to Patagonia
Tierra del Fuego, Rio Parana
Argentina is in motion
From the Andes to the ocean
See the bird with the leaf in her mouth
After the flood all the colours came out

The audience was wild, which caused the band to perform wildly. “Love and Peace or Else” and “The Fly” drove the whole stadium insane. The band ended the show with “All I Want Is You,” with Bono adding a snippet of “Love Is Blindness.” Later he decided to perform the whole song. It was just magic.

Photos from the show are available at fmkabul.com.