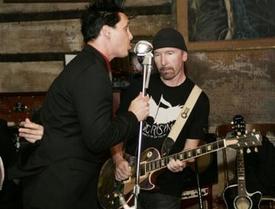 Two members of U2 are currently visiting the great city of New Orleans. Last night (April 27), The Edge made an appearance at the reopening of Preservation Hall, an historic jazz club located in the French Quarter (the landmark location suffered damage during Hurricane Katrina). Edge performed “Vertigo” with local musicians Clint Maedgen, Benjamine Jaffe, and Lucien Barbarin.

Also last night, Bono was spotted at a show by funk band Galactic at Tipitina’s Uptown, another well-known music club in the city. After the show, Bono chatted with fans, who were very surprised to see the U2 frontman there.

Bono and Edge are likely to be seen again in the city at other shows, which there are plenty of during the New Orleans Jazz Festival.