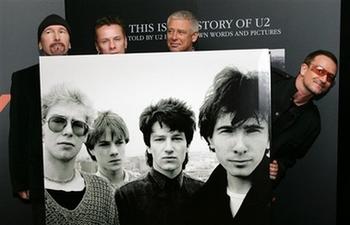 U2 were at a book signing for the U2 by U2 book at Waterstone’s Piccadilly bookstore in London today. A small number of U2.com members in the UK were invited to attend the book signing session. Other fans earned entrance into the event by camping outside the bookstore overnight in the rain.

U2log.com has received many queries from fans, asking if a book signing is planned in the United States. Although we haven’t been able to confirm any additional book signings, we have learned that the band has scheduled appearances on American television on the following dates:

Update: U2.com has just sent out an email to U.S. fanclub members, informing of a book signing in New York on Tuesday, September 26. If you are a U2.com member, check your email for instructions on how to attend the book signing.

There will also be a book signing in Dublin tomorrow (Saturday, September 23) at Easons on O’Connell Street at noon.

2 thoughts on “U2 participate in book signing”