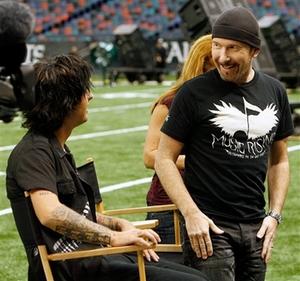 This afternoon U2 and their crew prepared for the band’s performance with Green Day tomorrow night at the Superdome. Rachel, our spy inside the Superdome, provided the following report:

2:45 pm – The U2 crew practice putting up and striking the stage as quickly as possible. The stage design is simple.

4:20 pm – The Edge rehearses some Green Day songs, as well as “The Saints Are Coming” and “Beautiful Day,” alone to a tape. His trusty tech Dallas Schoo stands by.

4:40 pm – Larry Mullen and Adam Clayton arrive with the rest of the members of Green Day, joining Edge on stage for rehearsal. Bono is the last on stage, wearing a different outfit than what he arrived in. It’s a black military-style jacket with an atomic bomb starburst design on the back, black pants, and a black tee. Bono grabs his microphone and says, “Welcome to the black and red conference.”

4:45 pm – The bands rehearse “The Saints Are Coming,” segueing into “Beautiful Day.” Every volunteer and staff member working in the Superdome is on the field watching the bands rehearse.

5:05 pm – Rehearsal continues. The song order for the performance tomorrow appears to be “Wake Up When September Ends” and “The Saints Are Coming/Beautiful Day.”
[Video of the rehearsal is available at KUTV.com.]

5:30 pm – Bono changes into a different outfit for the second half of rehearsal.

6:30 pm – A brass horn section joins the band on stage for “Wake Up When September Ends.”

7:10 pm – Rehearsal breaks with a round of applause from everyone on the field.

7:55 pm – Both bands return to the stage to rehearse the set again.

U2 and Green Day’s performance tomorrow during the pre-game show will air live on ESPN and at Rhapsody.com at 7:20 pm CT.

34 thoughts on “Sunday afternoon in the Superdome”