U2’s official website, U2.com, is celebrating the 20th anniversary release of The Joshua Tree with a minisite containing tracklisting and details, scans of magazine articles published at the time of the original release, as well as audio and video previews. We’re getting a bit lost clicking around the minisite, but we blame our old age.

You’d probably already heard this, but the DVD in the package will contain the often mentioned but never seen, Neil Jordan-directed promo video for the song Red Hill Mining Town. Finally we’ll all find out what happend to the dwarf canary!

If we were organised, we’d treat you to a picture taken on the set of said promo video… but we’re having trouble finding it in our archives. 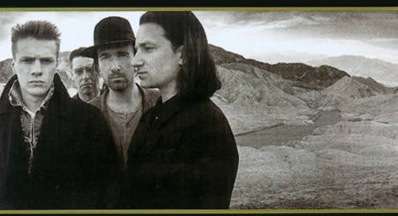 Only 20 years young, U2 are re-releasing The Joshua Tree to celebrate its birthday:

Though the always-exciting format details are still trickling in, we know this: new liner notes abound, and the CD/DVD combo contains five portfolio prints, whatever that might mean. The DVD supposedly sports both film from a July 1987 show at Paris’ Hippodrome and the documentary Outside It’s America, but, again, that’s tentative.

The Geranger Ltd consortium, including U2 and management, has won the bid to build the 600ft luxury apartment block that is to be the tallest building in Ireland and the location of the band’s new recording studio.

The studio will be egg-shaped and placed at the top of the tower, hanging from a cluster of vertical wind turbines and a huge solar panel.

Although the majority of apartments in the building will be ‘luxury’ and a 5-star hotel will be built in an adjoining building, there’s also room for 34 ‘social and affordable flats’. Fans, start queuing now! Your new digs will be ready in 2011.

Bid on a U2 poster for charity

From the excellent documentary ‘Factory – Manchester from Joy Division to Happy Mondays‘:

Reminiscing, New Order’s Hooky says: “Our record went down every single time we appeared on Top of the Pops, because we sounded so bad. I think we actually kept very much to our punk ethics. Right the way through New Order, you know, our attitude was very punky and Factory’s was as well, which was what was great about it.”

DJ Mark Pickering adds: “I remember Bono coming over to Rob (Gretton, Joy Division’s manager).: Bono came over and went: “I really, really respect you for doing that. I really wish we would have done that.” And Rob just turned around and pushed his glasses up and went: “Why the fuck didn’t you then?”