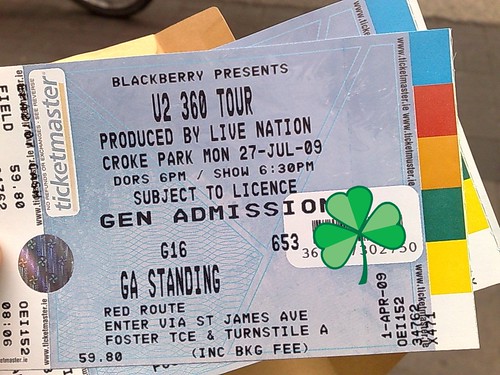 … and your intrepid reporter queued up for them at the Celtic Note record shop on Nassau Street in Dublin this morning at 5.45am GMT, together with long time U2log contributor Pat Lynch.

By 8am, the on sale time, some 50 people (mostly tourists!) had joined the queue and sales started in an orderly fashion. While seated tickets had to be ordered through the shop’s computer link, standing (GA) tickets were stacked up neatly on the counter. Many people were talking on their mobiles, asking for advice on which tickets to get.

We left with two standing tickets in our pocket and another four ordered through the Ticketmaster phone line, while friends elsewhere on the planet called in to report their triumphant stories: “We got 14 tickets!”

While sales appear much slower than they were for the first two Dublin shows, Ticketmaster reported standing tickets sold out around 40 minutes past eight.

How did you fare?