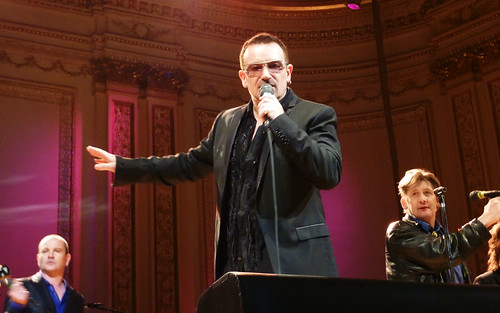 Gavin, Bono, Shane McGowan
We’re still recuperating from our whirlwind trip to New York City, where we attended the “Gavin Friday and Friends” concert at Carnegie Hall. By ‘we’ this time I don’t mean the editors of U2log.com, though some of them – past and present – were among us. By ‘we’ I mean the International Brigade, a group of friends who met online, through their love of music and Gavin Friday in particular. Some of us are into U2. Some of us aren’t. Since the late 80’s we have seen Gavin play live on many occasions, in various cities, on different continents. We all have to travel to see him play, because he doesn’t come around that often. When we heard of this event there was no question about it – we were there.
As sure as we were, many others were confused as what exactly the night was about. A charity gig? A tribute? An Aids benefit? A Hal Willner extravaganza? U2 were going to perform. Or not… the band was billed as separate members. The Virgin Prunes would reform. Or not. They said they never would. Who the hell are Flo and Eddie? Some U2 fans seemed unfamiliar with widely acclaimed artists like Rufus Wainwright, his sister Martha and Antony of Antony and the Johnsons, while others rolled eyes at the mention of Scarlett Johansson, Courtney Love and, well, U2.
For us die hard Friday-fans this concert was always about Gavin’s 50th birthday and those in the know gleefully looked forward to see an audience subjected to an evening of songs from his repertoire and influences. (“I hope U2 play their new single”, one fan wrote on a message board. Eh, no. “Is this a family show?” another asked. Not likely.) We were also very keen to find out how the other artists would interpret the songs that mean so much to us. 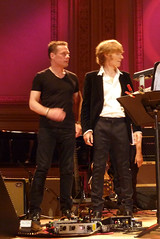 Larry, J.G. Thirlwell
U2 were more or less the odd ones out in this affair. Lydia Lunch next to Bono? J.G. Thirlwell next to Larry? Never in a million years could someone have imagined it. But the eclectic line up represents Gavin perfectly. Rock, cabaret, punk, pop, cinema, theatre, literature, classical and jazz… his body of work draws from every genre under the moon. This makes him unique, interesting and more or less unmarketable in a business that likes to put artists in a box. Friday is an acquired taste, like durian fruit, or olives. So strange at first taste, but oh so good when savoured.
Hal Willner, who produced Gavin’s first solo album ‘Each Man Kills the Thing He Loves’, has staged many similar events over the years: the Harry Smith nights, Leonard Cohen tributes, the Disney, Nino Rota and Rogue’s Gallery shows. Gavin has been involved in all of them. They are invariably long, messy, glorious, planned accidents. Willner’s talent lies in bringing artists from different genres together and make them cross the divide, always backed by a stellar band. The backstage scene is laid back, a leave-your-egos-at-the-door kind of vibe. The common denominator is a love of music. ‘Gavin Friday and Friends’ was Bono and Hal’s gift to Gavin, two friends’ tribute to their mate whose dream it was to play Carnegie Hall. They set it up over a 6 month period, deliberating through e-mails, text messages and meetings across the globe. Bono took care of business and got [RED] involved. Willner looked after production. It all came together.
Sat comfortably in front row, we watched the spectacle unfold. There was good, there was less good, there were touches of brilliance and moments of surrender. It wasn’t a Gavin Friday gig, although he was on stage for most of the night. His own live shows are intense, tightly structured affairs, steeped in darkness and shimmering light. Willner cast Friday in a show that reflected his own interpretation of who and what Gavin is. Personally, I had expected an emotional roller-coaster, but enjoyed instead a celebration of my favourite artist’s work. 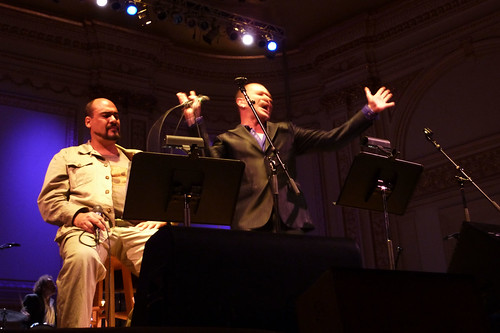 Eric Mingus, Gavin
Some of the highlights were unexpected. Antony, who is the music scene’s go-to man for backing vocals this decade (Lou Reed and Bjork are among the artists who’ve made use of his services), was the first to duet with Gavin and did so beautifully on the classic ‘He Got What He Wanted’. Courtney Love, a U2 and Virgin Prunes fan since the early days, surprised me first with her impassioned introduction to the Virgin Prunes-part of the set (she set U2’s angels against the Prunes’ demons), then with her duet with Gavin. The two of them and their big punk hearts tore up Magazine’s ‘The Light Pours Out of Me’, a song I didn’t even know existed and now cannot forget. Rufus Wainwright provided his Quebec-rooted harmonies on Kurt Weill’s ‘Benares-song’, his voice twisting and turning around Gav’s own Celtic-tinged vocals. The gentle giant Eric Mingus lived and breathed ‘Caruso’, his growl a match for Gavin’s snarl. And Joseph Arthur’s clear, strong voice added punch to ‘Each Man Kills the Thing He Loves’. 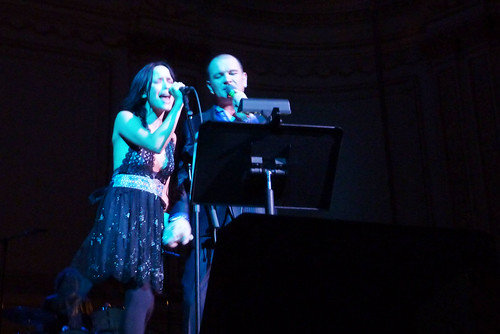 Andrea Corr, Gavin
Girls like a bit of Man Friday and the dames that graced the stage all vied for his attention. Courtney threw her body at and around him (and the next day tweeted he was ‘beyond hot’), while Maria McKee claimed first dibs. Later in the show, Gavin smoothed his way into Chloe Webb’s personal space, then made moves on Andrea Corr as she sang ‘Time Enough for Tears’, the couple holding hands like teenage lovers. Bono had to make do ogling Lady Gaga in her fishnets.
And what of U2? Well, they tried their hand at Gav’s ‘I Want to Live’ and ‘King of Trash’. For me, they didn’t match the originals. ‘I Want to Live’ lacked desperation (though Bono ad-libbed a bit of inspired opera) and ‘King of Trash’ was simply not trashy enough. Granted, they must have been cacking their pants sharing a stage with the likes of Bill Frisell and John Zorn. But they performed well on the songs picked from Gav’s glam-tinged teenage years: T-Rex’s ‘Children of the Revolution’ and Bowie’s ‘Jean Genie’. It was Bono on his own, however, who shone with ‘The Last Song I’ll Ever Sing’. A perfect chance for him to release the tortured torch singer inside of him. His take on the song was on par with, perhaps even better than Gavin’s own. The Edge on his turn served more than adequately on Gavin’s always mind blowing ‘Another Blow on the Bruise’. 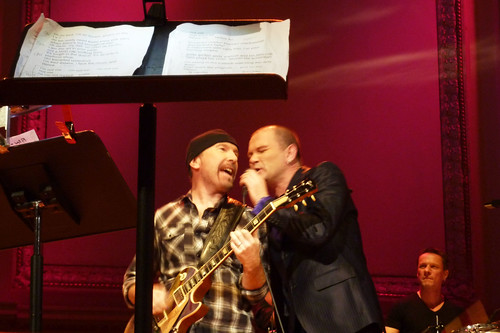 The Edge, Gavin, Larry
Then came the Virgin Prunes – some of them, anyway. Early on in the two-part set, in fact. Gavin, Guggi, Dik Prune (The Edge’s brother) and guest vocalist Jim Thirlwell, blasted Carnegie Hall with two classics from If I Die, I Die: ‘Sweethomeunderwhiteclouds’ and ‘Caucasian Walk’. Back in the day, Guggi was the fan favourite. It’s easy to see why. His stage presence is decidedly less menacing than Gav’s, whose unrelenting demeanor would scare the living daylight out of even the hardest post-punk Goth.
Where Guggi seemed hesitant – he’s a painter now and has had very little stage time since he left the band in ’84 – Thirlwell (that’s Foetus to you) was a solid back up, his vocals soared alongside Gav’s. Meanwhile, Maurice Seezer, pianist, impressed on the drums! Guggi threw shapes, his wiry body a living work of art. Gavin, center stage, stood tall, then crouched. Staring down the house, pounding his chest, conjuring up sulphur.
For the Virgin Prunes fans in our midst, it was a revelation to see that Gavin can still access and channel the primal anger that fueled his early Prunes’ performances. No Brit could ever match this Irish wrath, we speculated. Not even the Sex Pistols – whose anger was always externally motivated, while an Irishman’s fury seems to come from deep within the land.
That knowlege and the idea that friendship can be a lifelong, inspirational, all conquering thing, is what we took home with us after the show. (We already knew that Gavin Friday can command any stage.) ‘Bigger than love’, is what Gavin said on Twitter (follow him here) the day after the show. Totally.

44 thoughts on “Mates, Dames and Prunes – Gavin Friday and Friends”