The makers of Uncut magazine have produced a 148-pages issue all about U2, containing a collection of interviews from NME and Melody Maker, a full discography including a guide to rarities and bootlegs, as well as the stories behind all the albums. Buy the ‘The Ultimate Music Guide to U2’ from your specialist newsagent, or pre-order this special U2 collector’s of Uncut Magazine online.

Atu2.com’s Matt McGee is writing a book about U2 entitled ‘U2 Diary’.

The book will be a history of the band in a timeline/diary format and it will detail the important stories behind the facts.

It’s scheduled to appear in Fall, 2008 and will be published by Omnibus Press. This is the same publisher as Pimm Jal de la Parra’s and U2log.com’s own Caroline van Oosten de Boer’s ‘U2 Live – A Concert Documentary’.

Matt will be blogging about the book at U2diary.com. He is asking for your help and looking for stories, sightings, events, photos, newspaper/magazine scans that may help him write the book. 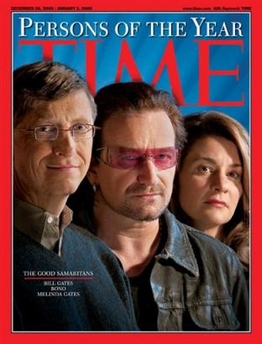 Time has selected its Person of the Year and it’s triplets: Bono, Melinda and Bill Gates.

The trio were chosen “for being shrewd about doing good, for rewiring politics and re-engineering justice, for making mercy smarter and hope strategic and then daring the rest of us to follow.”

Read more about the honor from the Time magazine commercial Reuters news article. 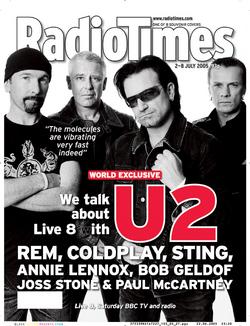 Eight is the number of different covers you will find on a souvenir edition of the Radio Times, commemorating the upcoming Live 8 concert. U2 are among the artists to garner their own cover of the publication, which will be available on newstands in the UK next Tuesday (28 June). Inside the magazine, U2 are interviewed in a 10-page feature.

Other artists with their own cover and featured inside are Coldplay, Paul McCartney, Sting, Bob Geldof, Annie Lennox, REM, and Joss Stone.

Fans outside the UK who wish to order a copy of the magazine may contact Radio Times’ reader services by calling 08706084455 next week.

We’ve managed to get our hands on a number of (unused, but a little worn with age) copies of the 1985 Virgin Prunes book ‘The Faculties of a Broken Heart‘ by Swiss author Rolf Vasellari. U2 content is limited: a few mentions and a drawing/painting, plus handwritten lyrics by Bono, but the book provides an interesting views on Dublin’s most outrageous sons in words and images. Contains many unique pictures of Gavin, Guggi and all the other members of the group, as well as interviews with – mainly – Gavin. Fans interested in ordering details should get in touch through our contact page. And from the attic of Mr Friday’s abode, we’ve also rescued a bunch of limited edition Gavin Friday ‘bleeding heart’ t-shirts if you’d like to stand out in the crowd…

U2 will be talking about themselves in depth in ‘U2 by U2’ a new ‘official’ book published by Harper Collins on September 9, 2005. The publishers have set up a microsite for this 352 pages thick tome where you can read more about the book and sign up to receive up-to-date information (although the confirmation page currently isn’t working. D’oh.).

There is no reference to it on the microsite, but we believe Neil McCormick, who recently published his own U2-related book, interviewed the band for this publication.

Should he get bored, Bono can always tend to his memoirs:

Rocker BONO is releasing a book (pre-order) of ‘conversations’ with novelist pal MICHKA ASSAYAS, because he has “stories to tell that aren’t songs”.

So Assayas is Bono’s literary version of The Edge?

Bono is among the contributors of Memories of John, a new book that pays tribute to the work and life of John Lennon. Edited by Yoko Ono, Memories of John includes contributions from Elton John, Joan Baez, Iggy Pop, James Brown, Ronnie Wood, Nils Lofgren, Mary Wilson, and Dennis Hopper.

Ono asked the contributers to submit words or artwork that illustrate how Lennon’s music influenced or inspired them. Bono’s contribution is a drawing of Lennon in the style of Lennon’s artwork (which is not a far stretch from Bono’s own artistic style). Bono’s drawing features Lennon wearing his trademark wire-rimmed spectacles with Bono’s Fly shades over them. Beneath the drawing, Bono quotes several of Lennon’s lyrics to form a thought and signs his name “Bono, Age 12.”

Memories of John will be published in the spring of 2005 by HarperCollins. 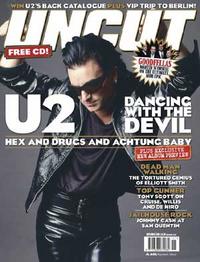 Uncut magazine’s November issue features a U2 special, with an interview with Bono. The special looks back at the band’s transformation from ‘earnest musos to manic cyber-rockers’. Uncut investigates the darker side of the band and the circumstances surrounding the making of Achtung Baby. As a bonus, the issue includes a track by track preview of the new album and a competition with a chance to win a trip to Berlin. Uncut is a U.K. publication.