The Chicago Tribune gets a behind the scenes look at U2360 at Soldier Field with Jake Berry, Paul McGuinness and Mark Fisher. Berry once again mentions the ‘intimacy’ this stage set up provides. For the band, yeah – but for the audience? Not so much – certainly not more, perhaps a little less than on previous tours – at least that’s been my experience at 11 shows on the European leg.

I think the intimacy at U2 gigs is created between band and audience, through the magic of music. Sure the production can help, but it’s not the be all and end all. And focusing on this and giving the tour that ‘360’ moniker, perhaps was a bit of a miscalculation – a lot of not so clued in folks got the wrong impression (Some thought the stage would be in the middle of the stadium, or it would rotate, or they complained it wasn’t fully 360, etc.)

That said, it’s a great tour, seems like the band is in a good place, I enjoyed the shows immensely. I hope all of you experience the same on the USA leg about to start. We probably won’t be able to cover this leg the way we did the previous, but there’s a lot of sites out there that will. We’ll try to point you in the right direction.

From the excellent documentary ‘Factory – Manchester from Joy Division to Happy Mondays‘:

Reminiscing, New Order’s Hooky says: “Our record went down every single time we appeared on Top of the Pops, because we sounded so bad. I think we actually kept very much to our punk ethics. Right the way through New Order, you know, our attitude was very punky and Factory’s was as well, which was what was great about it.”

DJ Mark Pickering adds: “I remember Bono coming over to Rob (Gretton, Joy Division’s manager).: Bono came over and went: “I really, really respect you for doing that. I really wish we would have done that.” And Rob just turned around and pushed his glasses up and went: “Why the fuck didn’t you then?” 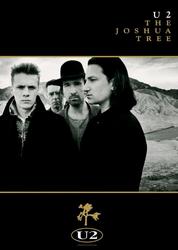 SwitchBlog (Inspired by Apple’s Switch Campaign) mentions U2 in their post ‘Social Currency and the iPod‘ which talks about Apple’s strategy concerning the iPod, digital downloads, DRM and the ‘godlike genius’ of Steve Jobs:

“Rumors have been floated about a Madonna iPod, and others, but without a Beatles iPod as the precedent, it would have been premature. The U2 iPod was an exception. It was a foot-in-the-door for Apple and an opportunity for U2 to welcome the Beatles into the future of music distribution. U2 is the only band with a long enough history and enough current relevance to pull this off.”

Read the full story…
… and a follow up post: The U2 iPod and Its Relationship to the Beatles Deal.

Since there seems to be a bit of a lull as far as U2 is concerned at the moment, we decided to drag up an old article and maybe add a little more discussion.

The article, which originally appeared in the New York Times, speaks of the organisers of Ozfest and their quest for fresh blood. More interestingly, it goes to explain how all the big audience pullers these days (U2, Madonna and Metallica to name a few) are all the same bands that were big audience pullers 10 years ago. While there are newer bands such as Coldplay or the Killers emerging, these bands simply don’t seem to have the same crowd pulling abilities as a band like U2.

And that specifically is an interesting view that may have some truth in it. It’s undeniable that bands like U2 or Madonna easily sell out complete stadiums, but who’s there to take their place. Much as we’d like to see U2 go on forever, realistically, there will be a time when they call it quits. And then what? Is there a future for stadium concerts, or concerts at all and will any band ever be able to live up to U2? 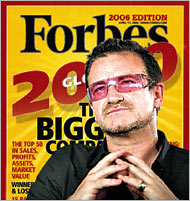 It’s been all over the news in the past few days. Elevation Partners, an investment group that Bono is involved in, buys up a large slice of Forbes. Forbes magazine often gets referred to as the “bible of capitalism”. At the same time U2 Unlimited, the company that holds all the rights to the U2 master tapes, moves to Holland to avoid a change in Irish tax laws, rising a lot of criticism from Irish politicians. And to top the bill, there’s that damn “U2 Tower” no one in Dublin really seem to want, other than some politicians and the band themselves. The Guardian does a great job of summing up all the controversies in this article.

A lot of criticism is being voiced over this. Is this the same Bono that helped stage Live Aid, or the Drop the Debt campaign? Surely he could not possibly be avoiding taxes by moving a company to the Netherlands, right?

And once again, we got thinking about this. Bono is often criticised for being involved in all this charity fund raising money, but then being obviously, some would say filthy, rich himself. Avoiding tax schemes and investing in the “bible of capitalism” surely can’t help this. But is it fair? Does having a lot of money and preaching against world poverty make you come across as a hypocrite? It’s certainly what the press makes it out to be.

It’s a discussion that’s often raised and that probably everyone has an opinion of and we’re interested in hearing it.

Browsing for the latest U2 news and mentions, we came across this article; a concert review of a Crosby Stills Nash & Young gig at the Verizon Amphitheatre in Irvine. The article deeply goes into the political stand the band is taking throughout the concert and generally seems very commendable. One particular quote in the article stands out though:

“It is rather bizarre that considering the state of the planet right now, there is very little protest in music. Unlike the 60s and 70s, only a handful of artists have the guts to speak up. U2 won’t do it anymore, it would interfere with Bono’s political standing. The Stones sort of whisper it, but you can’t shout too loud with a ‘Sir’ in the band.”

This got us thinking and wondering whether there might be some truth in it or maybe the author is just making a hollow statement.

So we ask you the same question: “Does U2 still have the balls to take a stand?”

Rolling Stone named him the “most successful producer in any genre”, while MTV called him “the most important producer of the last 20 years”. His name comes up when discussing Nine Inch Nails, Metallica, The Red Hot Chilli Peppers’ latest, but also people like Neil Diamond, Tom Petty and of course Johnny Cash are only a handful of the ones associated with producer Rick Rubin. Amongst this list of names, one is noticeably missing: U2.

According to this recent article in USA Today, Rubin himself would “love to produce a U2 disc”. Our friends at @U2.com referred to an interview an Hungarian U2 site conducted to make clear that that feeling is mutual.

Time to have a closer look at Rick Rubin. Looks? Biker or hippie? Rick gives off some really confusing vibes, but then so does his work. Here’s a man that can’t and won’t be stereotyped as anything other than eclectic. However there are a few things that can be said about Rick Rubin. Like how he seems very capable at bringing bands back to basics, cutting all the crap and producing a very clean, stripped down sound instead. Or how he seems to be able to breathe new life into a band’s sound and career, like he did with Cash or the Peppers. Another trademark has been having artists cover unexpected material in their own style, of which Johnny Cash’s cover of One is but one example.

Taking all this into consideration, it seems a teaming up of U2 with Rubin could produce something very worthwhile and refreshing. We at U2log would be very excited about such a collaboration. What about you?

Excuse us while we have a laugh. U2 have made the list of The 10 Most Tech-Savvy Rock Stars in Business Week Online, featuring the musicians who ‘best harness technology, especially the Internet, to market themselves, their products, and their causes’.

Since when does harnessing Steve Jobs make one tech-savvy? Surely that’s ‘business-savvy’ more than anything else? As for U2’s Internet presence… well, let’s not open that can of worms.

Bono also makes a solo appearance on the list, for launching RED and collaborating with companies such as Motorola on their special edition phone. Fair enough. But does he have the savvy to change its damn Crazy Frog ringtone all by himself?

Henry Rollins, who has never hidden his dislike of U2 in general and Bono in particular and whose entertaining spoken word shows often featured an elaborate and frankly rather funny story called ‘The night. I had the chance. To kill Bono.’ *), is getting mellow in his old age.

‘Henry noted he’s never liked U2’s music, but he admires the humanitarian efforts of Bono. Henry did comment, though, he had a problem with photos of Bono he saw that were recently taken in the Oval Office. Henry explained Bono was unshaven and his clothes were disheveled in the photograph, which he took as a sign of disrespect for the history of the Office itself. When Robin responded most of the reason politicians have given Bono so much clout was because of his rock star image, Henry conceded she was right.’

It’s not the first time Rollins’ has said U2 ain’t all bad. In a recent Washington Post chat he was asked if there was any song of the band that made him say ‘that’s not bad’:

‘Yeah, absolutely. A song called “Lemon” is a great song because Brian Eno overhauled that guitar sound so much it sounds like an interesting Eno song.’

But Henry isn’t keen on the band’s rhythm section, as he told CrazyWire.com:

‘U2, in particular, bug me because it’s like such a bad rhythm section. They’re kind of a one-trick band that’s propped up by really good production. I do applaud Bono’s humanitarian efforts; getting third-world debt acknowledged, trying to help AIDS in Africa and lending awareness to that. I think that’s great and I’m sure he contributes a lot of his own money to that. That stuff is also great because it keeps him out of the studio, so there’s no downside to this.’

More Rollins at his website, 21361.com, or check out the cool video for the single ‘Liar’ directed by none other than Anton Corbijn.

*) It involves his crazy mum’s love of the band, a night out on the town with a rather dim date, and a chance encounter with the cowboy-hatted Irishman. You’d have to hear him tell the story, really.