To commemorate (and emphasize) the return of POP in the set (albeit in snippetry) here’s a slideshow of some 106 webcam shots I recently discovered on an old zip-disc (captured in october 1996 during the POP recording sessions).

On Monday evening @U2miracle on Twitter discovered a new U2-related Twitter account. Fans quickly realised that the pictures being tweeted from @U2_360tour could only come from within the organisation.

It looks like it could be The Edge (or someone really close, possibly his wife Morleigh, although both appear in the pictures), using a BlackBerry 8900 (as deducted from the exif-info inside the picture files). The U2 guitarist has been using a Blackberry for some time now, but U2 also recently struck up a deal with RIM after their relationship with Apple ended. “BlackBerry Loves U2” stands are prominently featured at the U2 360 tour concert venues and members of U2’s organisation have been spotted wielding their new brand new mobiles – complete with a slick 360 logo start up screen.

General consensus is, if U2 would contact @ev or @biz at Twitter HQ, they could probably get hold of the currently suspended twitter.com/u2 account, instead of using the current awkwardly named “U2_Tour360”.

Pictures by U2tour.de, via TwitPic, at the Friedrichstadtpalast in Berlin.

The Edge and Adam are attending the International Film Festival (Berlinale) in Berlin, Germany, for the premiere of the film ‘It might get loud‘.

Peter Gabriel is the recipient of the Amnesty International ‘Ambassador of Conscience Award’ 2008, Art for Amnesty has announced. The award will be presented to him by The Edge at a the Hard Rock Cafe in London, on September 10th, 2008.

The Ambassador of Conscience Award recognises exceptional individual leadership and witness in the fight to protect and promote human rights. In 2005, U2 and Paul McGuinness were the recipients of the award.

It’s a fun packed week for Edge as the Davis Guggenheim documentary ‘It Might Get Loud‘ in which he’s featured alongside Jimmy Page and Jack White will officially premiere at the Toronto Film festival this Friday, September 5th.

Bono, Jeremy Irons and Sinead Cusack read the poetry of Yeats for a select audience of around 100 people, at the National Library in Dublin on Wednesday evening. Bono read ‘The Host Of The Air‘, ‘When You Are Old‘ and ‘He Wishes For The Clothes For Heaven‘ and parts of ‘No Second Troy‘. The evening was hosted by author Josephine Hart.

It was a special birthday tribute to the Irish poet, who was born in Dublin on June 13, 1865.

Listen to the event on RTE Rado 1’s Eleventh Hour. The morning after, Bono talked about language and poetry (Real Audio, 20 mins in) to BBC Radio 4.

The BBC is blogging from the World Economic Forum in Davos. Their reporter Tim Weber mentions tight security on site:

‘Without a badge, you won’t get far here. For some, though, the staff might be tempted to make an exception. But they don’t. As I rush out of the conference centre to go to a briefing, Bono walks up and as he is without a bag or other accessories, he tries to jump the queue at the x-ray machine. But he is turned back firmly by a security guard. Just as she does so, she hesitates. “Bono?”, she asks. He nods. She smiles – but points him to the badge reader regardless.’ 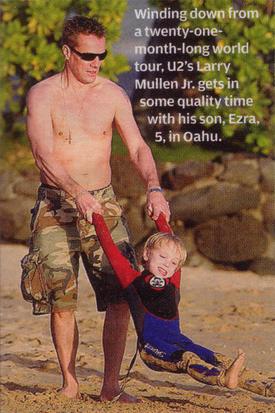 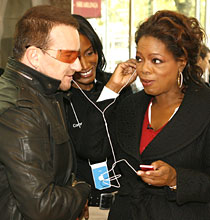 Photo courtesy of The Chicago Tribune.

Bono and Oprah, seen here listening to Weird Al’s latest album, are set to announce a bunch of new RED products on tomorrow’s Oprah show including a red iPod nano.

We know most of our u2log.com readers are avid Oprah watchers anyway, but for the few of you that don’t normally tape it here’s your reminder to set your VCRs/TIVOs/Bitorrent trackers.

The Kinks sang about, Bono shows it. The latest in fashion footwear coming right at you from St. Tropez, as shown by our favourite male model Bono: Edun Lift flip-flops! Gowon, wiggle those tootsie toes and get yours now at u2.com (limited edition)! 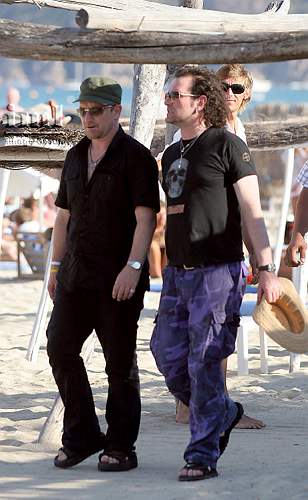