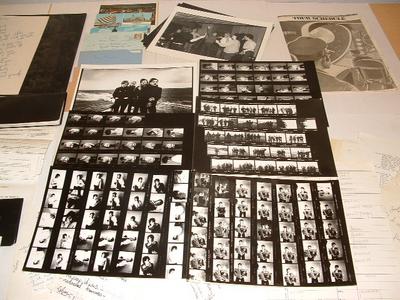 Readers should know something about U2log.com: We are damn good at being discreet. Almost a year ago, one of U2log.com’s editors was contacted by Danielle Rheaume from Olympia, Washington (now a Vancouver resident), who claimed a friend of hers, Cindy Harris, had found some “interesting U2 material” in the attic of her Tacoma home. Harris had found the material when she and her husband purchased the home many years earlier and had forgotten about it. Last year, however, Harris brought up her discovery in a conversation with her friend Rheaume, who is a U2 fan.

When Rheaume heard what her friend had in her attic, she was astonished because she recognized exactly what it was: the contents of Bono’s briefcase that had been stolen 23 years earlier in Portland.

The saga of the stolen briefcase is well known within U2 fan circles. It contained lyrics for U2’s second album ‘October’, and disappeared when U2 played a club in Portland in 1981. The theft influenced the making of the U2’s crucial second album, as Bono had to rewrite from scratch. Over the years, Bono’s briefcase has become the Holy Grail of U2 mythology. Only recently a U2log.com reader commented how finding it would be ‘quite the story’.

This is the story. Rheaume contacted U2log.com to help her and her friend get in touch with U2’s management so the two could return the material to Bono in person. Knowing that anyone would find their claim unbelievable, we asked for photographic evidence to provide to U2’s management and received the photos that are published with this report.