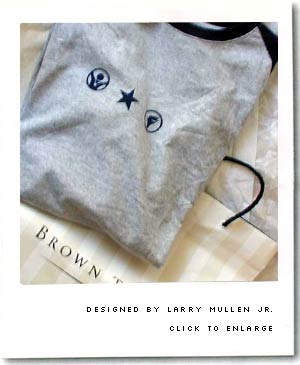 Fresh from Dublin’s Brown Thomas, the T-shirt designed by Larry Mullen for the Special Olympics Ireland, 2003.

END_OF_DOCUMENT_TOKEN_TO_BE_REPLACED

Last week we told you about Ali Hewson’s helping to raise money for Down’s Syndrome Ireland (see Bags on Display). Now we’ve learned that Larry Mullen also has pitched in for the cause by designing a t-shirt for the organization.

Larry’s design, along with several other celeb t-shirt designs, are available for purchase at Brown Thomas stores and its affiliates across Ireland. All profits from the t-shirts, which retail for Euro 30 for ladies and Euro 35 for gents, will go directly to Down’s Syndrome Ireland.