U2 fans get your wallets out. Win a real U2 photograph to decorate your wall and support the African Well Fund, all in one go.

Nineteen U2 fans and photographers including our own Ruth Barohn have donated their best shots of the band (and one of their friend) to the 2nd photo auction in support of the African Well Fund‘s ‘Build a well for Bono’s birthday’ charity, organised by Phil Romans. Last year’s auction raised an amazing $11,000, so get bidding to top that number.

The photo auction starts April 14th, and will last for 7 days. The first auction starts at 12pm EST, and each auction will subsequently start at one minute increments.

Go check out the auctions on eBay.

U2 fans in Australia and New Zealand are expressing their disappointment of not getting tickets to the shows in their countries, which sold out faster than you can say, “Damn you, Ticketek and Ticketmaster!” The Sydney show sold out in an hour, the Auckland show in 90 minutes, and the Melbourne show in two hours. A second Auckland show was announced for March 18. Second shows in Sydney and Melbourne are expected to be announced tomorrow (Tuesday, Dec. 6).

Tickets to the OZ and NZ shows are already being sold on eBay for more than $2000 each.

Fans who were locked out of the on-sales have an alternative way to score tickets. Over the weekend, ETS, the official tour and travel operator for the Vertigo Tour, announced that it is offering packages for the shows in Auckland, Brisbane, Melbourne, Adelaide, and Sydney. The packages include hotel accommodations, a pre-show party, and concert tickets.

ETS is also offering a contest to win a package for two to see U2 in Sydney. You must register as an ETS Insider to enter the contest.

Update: U2 announced today additional shows in Auckland, Melbourne, and Sydney. Tickets for these shows will go on sale on Monday, Dec. 12 at 9 a.m.

Want to own a piece of U2 history? Well, you can. A seller called ‘bruegel2004’ has put up this intriguing item for auction on eBay. 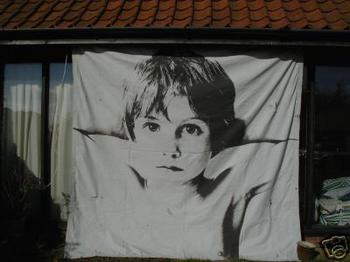 Your chance to own U2’s first ever stage backdrop, measuring 260cm X 260cm hand painted ‘BOY’ on canvas. This backdrop has featured in all the band’s early appearences ie. Old Grey Whistle Test and Live At Red Rocks. There are a couple of small holes due to the canvas folding during storage but generally in very good condition and has been well cared for. Your chance to purchase a genuine piece of rock memorabilia.

Our long time readers will remember Promo Bono from back when the new millennium was fresh, Florida was in the middle of re-counting votes and people still believed everything we wrote. One reader in particular who shall remain unnamed (elmo, Ed.) recently asked “and where IS Promo Bono?”. Good question. Read on for the full story.