The band invited Holmes to DJ at their after-show party after the European launch of U23D at Cineworld in Dublin on February 20. The party will be held at the Jameson Distillery.

U2 and friends collaborate on tribute to The Dubliner’s Ronnie Drew.

Bono and The Edge have co-written a song for Ronnie Drew, the singer with Ireland’s best known folk band, The Dubliners.

Drew has been battling cancer for some time. Bono told Hot Press: “When you’re fighting cancer your mood is critical. We want Ronnie to know how much he is respected and loved.”

Bono, The Edge, Simon Carmody and Grateful Dead lyricist Robert Hunter wrote and demoed the song entitled ‘The Ballad of Ronnie Drew’ last week and the band (U2/Kila) laid down the rhythm track at Windmill Lane at 10am, this Tuesday morning. Bono, Shane McGowan, Christy Moore and Damien Dempsey all took turns singing the verses. On Tuesday night, everybody who is anybody in Irish music gathered together at the studio, to record the backing vocals of the song, ‘we are the world’-style.

According to an insider the session ‘…went well. Mad hectic, but fun.’ The Pogues’ Shane McGowan apparently had some trouble getting into the country, forgetting his passport in the hurry.

The single’s expected for release around Easter this year. We’re told proceeds will go toward a children’s cancer charity.

– Hot Press has the details.
– U2.com talks to Simon Carmody 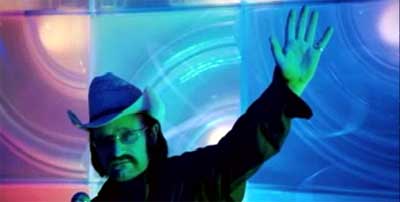 Niall Stokes of Hot Press reviews U2’s BBC1 gig on the Hot Press website and quotes Bono telling Radio 1 DJ Jo Whiley: “We fucked it up a couple of times, but I think we got away with it.”

Stokes also mentions a conversation with The Edge in which the guitarist explains to him he has as a new trick up his sleeve:

“Across the other side of the room, Edge is beaming – clearly satisfied that a good night’s work has been done. I compliment him on his slide playing. “We’ve had to invent a new thing,” he tells me, “so I can switch from normal chords to playing slide in the middle of a song. It’s tiny, and fits on the tip of the finger. I’ll show you…””

Unfortunately, Stokes does not elaborate on Edge’s thingie.

Hot Press’s Peter Murphy reviews How to disable an atomic bomb in this weeks’ Hot Press, the leading Irish music magazine. The article is available online for subscribers and gives the album 8.5 out of 10:

“But when early reports telegraphed this as Edge’s record, they were obviously referring to his choirboy melodic instincts as much as an addiction to noise. Atomic Bomb is positively Spector-esque in its ambition, although curiously enough, it’s not a showy record, the playing being mostly subservient to the songs.”

END_OF_DOCUMENT_TOKEN_TO_BE_REPLACED

We’re told U2log’s pretend Bono doll has appeared in Ireland’s Hot Press as the real deal. What’s more, it’s credited to our mates at Youtwo.net. Nice one. Our subscription won’t arrive for a while… anyone got a copy and a scanner?