U2 and their manager Paul McGuinness have been named ‘2005 Ambassadors of Conscience’, an Amnesty International Award.

Art for Amnesty spokesperson Bill Shipsey said that ‘for their art and music alone U2 would be worthy recipients of Amnesty’s most prestigious human rights Award’. The Irish poet Seamus Heaney, whose work inspired the award, commented ‘U2 have sung themselves to where great singing comes from, that place where art and ardency meet in the light of conscience.’

The band were lauded for their promotion of the Universal Declaration of Human Rights during the shows on their current Vertigo World Tour. 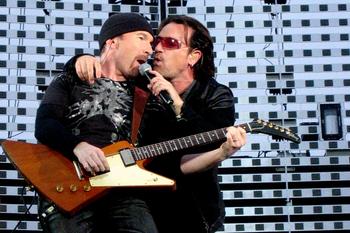