Second and last show in London’s Wembley stadium tonight. Newspapers reviewed the first show as “a qualified triumph for vaulting ambition“, “with a sound so hissy that it might as well have been coming from a clapped-out transistor radio” (more reviews in our lifestream).

Support acts of tonight are The Hours and Glasvegas and during a last minute soundcheck the band played New Year’s Day and Until The End Of The World.

Reports are the roof is opened further than previous night, which benefits the sound.
When the last notes of tonights show fade out U2 will have played before an estimated 1.600.000 people in 21 gigs, with three more European shows to go…

The setlist gets a bit of a mix-up with the inclusion of UTEOTW, New Year’s Day and Stay:

Big thanks to the Editor-in-chief of U2log and her fabulous live feeds!
All video links courtesy of u2gigs.com/u2006com

END_OF_DOCUMENT_TOKEN_TO_BE_REPLACED

U2 bring their 360 production into London for the first of two shows. Tonight Wembley stadium will welcome its biggest crowd ever, with 88.000 people attending (former record holders: Rod Stewart in 1995 and Foo Fighters in 2008, both played in front of 83.000 people). Total attendance over two shows is estimated 170.000.

Mysterious Ways and Your Blue Room were played in full during soundcheck, as well as fragments of Beautiful Day and Get On Your Boots.

Support acts for this first night are The Hours and Elbow.

END_OF_DOCUMENT_TOKEN_TO_BE_REPLACED

A different perspective on ‘Get On Your Boots’ at Broadcasting House, filmed from a hotel opposite the building.

END_OF_DOCUMENT_TOKEN_TO_BE_REPLACED 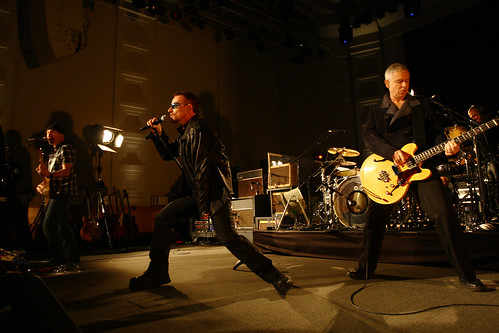 After waiting out in the cold from 9am we finally got into the BBC Radio Theatre and secured a spot at the front next to Edge. Everything was amazingly organised and fans were led into the theatre in the order in which they had queued up. Take note venues of the world!
END_OF_DOCUMENT_TOKEN_TO_BE_REPLACED

Unfortunately the clips below have been removed from YouTube for copyright reasons, but you can see some lovely fan-shot footage here.

U2 played Get On Your Boots, Magnificent, Vertigo (with snippets of Substitute and She Loves You) and Beautiful Day on top of BBC’s Broadcasting House in London’s Langham Place tonight while about 5,000 fans watched from below. Police closed Portland Place in Westminster to divert traffic away from the area.

Immediately after Wednesday night’s Brit Awards, Coldplay and The Killers performed a benefit concert for War Child at Shepherd’s Bush in London. Bono and The Killer’s Brandon Flowers joined Coldplay on stage to play The Killers’ All These Things That I’ve Done together. U2tour.de was on the scene and captured this picture. Click it to see it enlarged.

Then, having only rehearsed minutes beforehand backstage, The Killers and Bono joined Coldplay onstage to perform ‘All These Things That I’ve Done’ together.
Although the U2 man was a bit shaky on the lyrics to The Killers song, the three frontmen led the crowd through a rousing sing-a-long as they repeated the tracks “I’ve got soul/ but I’m not a soldier” refrain.
“This is going to be the best encore you’ll ever see!” declared Martin as the three acts wrapped up the night.

The Observer’s Sean O’Hagan, a long time friend of the band, spent 18 months following them from Fez to Dublin, as they recorded New Line On The Horizon.

He’s captured his travels on film and in part one of this exclusive – but brief- footage the band begins sessions in a converted riad in Morocco.

Watch the video on guardian.co.uk

END_OF_DOCUMENT_TOKEN_TO_BE_REPLACED

Mark your calendars! U2.com reports that ‘No Line on the Horizon’, the new studio album from U2, will be released on Monday 2nd March, 2009.

Written and recorded in various locations, No Line On The Horizon is the group’s 12th studio album and is their first release since the 9 million selling album How To Dismantle An Atomic Bomb, released in late 2004.

Sessions for No Line On The Horizon began last year in Fez, Morocco, continued in the band’s own studio in Dublin, before moving to New York’s Platinum Sound Recording Studios, and finally being completed at Olympic Studios in London.

The album calls on the production talents of long-time collaborators Brian Eno and Danny Lanois, with additional production by Steve Lillywhite.

Billboard runs the story and has a quote from a ‘source’ who heard songs in their early forms: “…amazing and a little out there. I hope they don’t change anything.” (Read more.)

Peter Gabriel is the recipient of the Amnesty International ‘Ambassador of Conscience Award’ 2008, Art for Amnesty has announced. The award will be presented to him by The Edge at a the Hard Rock Cafe in London, on September 10th, 2008.

The Ambassador of Conscience Award recognises exceptional individual leadership and witness in the fight to protect and promote human rights. In 2005, U2 and Paul McGuinness were the recipients of the award.

It’s a fun packed week for Edge as the Davis Guggenheim documentary ‘It Might Get Loud‘ in which he’s featured alongside Jimmy Page and Jack White will officially premiere at the Toronto Film festival this Friday, September 5th.