Q magazine talks to – a very busy – The Edge about U2’s new album. The guitarist sheds some light on the album’s sound and confirms some of the song titles that have floated around the web for some time.

“‘We wanted to give it some variety. There is some dark, heavy stuff but there are also some lighter things. Some we’ve really had to sweat to get and some just came so easily.” Work-in-progress highlights include “f—k-off live rocker” “Breathe”; “For Your Love,” which Edge says is one of his best-ever riffs; and the aforementioned “Get On Your Boots” (“Eddie Cochran with barbershop harmonies”). Other notable tracks include the eight-minute-long “Moment Of Surrender” and “No Line On The Horizon,” inspired by a distortion box called Death By Audio recommended by ex-Secret Machines guitarist Ben Curtis.”

The article suggests the band is still unsure whether to release the album pre- or post Christmas.

Read the full story at U2france.com.

Darfur Now is a newly released documentary about the struggles and achievements of six different individuals from inside Darfur, Sudan.

At the Darfur Now MySpace page you can, among other things, listen to Bono and Stevie Wonder’s song “Love Is In Need Of Love Today” which is used during the documentary’s end credits.

Bono: “I spoke to him last week… the voice that was louder than any rock band was a whisper. Still he communicated his love. Full of love.”

The Italian tenor Luciano Pavarotti died at his home in Modena today. He was 71 years old.

Pavarotti once famously asked Bono’s housekeeper to “Tell God to give me a call” when he found it difficult to get hold of U2’s singer. He was trying to get U2 involved in his charity concert ‘Pavarotti and friends‘ for Bosnia’s war children. When Bono did get involved, the collaboration produced the single Miss Sarajevo. Bono later duetted with the opera legend on various occasions, including the performance of Ave Maria shown above. 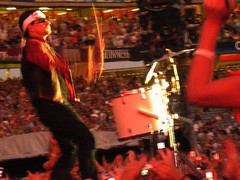 Fans either loved or hated it: Bono’s manic percussion act during Love and Peace or Else on the Vertigo tour. He always did march to the sound of his own drum. Bless. Whatever your feelings on the matter, you can now share your photographic memories of the Man with Big Drum and Bandanna at www.bonodrumming.com.

Fluxblog’s Matthew travels to Missouri to see the band in concert at the Savvis Center in St. Louis. He reviews both the opening act and U2, and touches on the political implications of the current ‘heart of darkness’ part of the band’s set. There are some good reactions in the comments.

“Love and Peace Or Else” was far better in St. Louis than in the 10/8/2005 MSG set, as was the rest of the so-called ‘heart of darkness’ mini-set that also includes “Sunday Bloody Sunday” and “Bullet The Blue Sky.” Though I quite enjoy “Love and Peace,” this is by far the weakest part of the Vertigo tour – for one thing, these three songs in a row feels more than a little redundant on a musical level, but more than that, there are very troubling political implications in the repurposing of the latter two songs…”

‘I suspect that politics, or even foreign affairs, was not the main topic of discussion. […] Having listened in on at least one short chat between these men I can tell you that they probably talked about faith, compassion and love.’

U2log.com has learned a few more details from yesterday’s preview of How to Dismantle an Atomic Bomb in Australia, including the running time and producer of each song:

Other details emerging from the preview: