Get ready to rip, folks. RTÉ 2XM will play the title track of U2’s new album ‘No Line on the Horizon’ on Thursday, February 12 at 12 noon GMT.

You can tune in to 2XM on DAB digital radio sets in the Greater Dublin area, Cork and Limeric, or online at www.rte.ie/digitalradio.

We got the heads up from U2tour.de via Twitter: Walmart online has posted previews of all the tracks on No Line on the Horizon.

Update 02/08: Walmart has taken down all the previews, except ‘Boots’.

It’s always hard to tell from random 30-second clips, but early favourites for me are: the title track, Moment of Surrender, Cedars of Lebanon and Fez-Being Born. YMMV.

What are you waiting for? Have a listen and let us know what you think.

U2 have uncovered the sleeve, tracklisting and formats of their new album ‘No Line on the Horizon’ and the single ‘Get On Your Boots’ on their official website.

‘Get On Your Boots’ will be released as a digital download on February 15th and a physical format will follow on February 16th.

Released on March 2nd (March 3rd in the US), the album will come in a standard format with 24 page booklet and in digipak format. The digipak includes an extended booklet and the album’s companion film “Linear” by Anton Corbijn. A limited edition 64 page magazine will also be available, featuring the band in conversation with artist Catherine Owens, and new Anton Corbijn photographs. No Line On The Horizon will be released on 180gm vinyl. (More on the formats below)

The album cover artwork is an image of the sea meeting the sky by Japanese artist and photographer Hiroshi Sugimoto.”

No Line On The Horizon will be available in five formats;

Not mentioned in U2’s press release is the single’s radio premiere, which will take place this Monday (January 19th) at 8.10am GMT on The Colm & Jim-Jim Show on RTÉ 2fm, in Ireland. Dave Fanning will play the new single and he will be talking to Colm and Jim-Jim from 7.30am about ‘previous U2 albums, his relationship with the band and memories of one of the greatest bands in the world today’. You can listen to the show online on RTE.ie.

U2tour.de has details on radio premieres in various European countries.

New on U2.com (subscribers only), a video of Gavin Friday explaining what the symbols on U2’s whiteboard mean. Friday, as U2 fans will know, is the band’s preferred ‘midwife’, and helped deliver U2’s new baby via caesarian.

We’re amused by the note on ‘Moment of Surrender’ at the top of the board. It reads ‘Brian would like to talk about this’. From what we’ve heard, Eno – not a fan of brevity, perhaps – fought for a 9-minute version of the mix, instead of the 7’12” version the band preferred. That might be what the note referred to.

END_OF_DOCUMENT_TOKEN_TO_BE_REPLACED 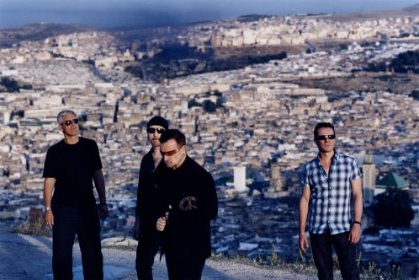 Amazon is listing five different versions of U2’s new album ‘No Line on the Horizon’.

Two of the versions mentions a ‘film download’. This should refer to a film the Dutch photographer and director Anton Corbijn shot for the album.

Mark your calendars! U2.com reports that ‘No Line on the Horizon’, the new studio album from U2, will be released on Monday 2nd March, 2009.

Written and recorded in various locations, No Line On The Horizon is the group’s 12th studio album and is their first release since the 9 million selling album How To Dismantle An Atomic Bomb, released in late 2004.

Sessions for No Line On The Horizon began last year in Fez, Morocco, continued in the band’s own studio in Dublin, before moving to New York’s Platinum Sound Recording Studios, and finally being completed at Olympic Studios in London.

The album calls on the production talents of long-time collaborators Brian Eno and Danny Lanois, with additional production by Steve Lillywhite.

Billboard runs the story and has a quote from a ‘source’ who heard songs in their early forms: “…amazing and a little out there. I hope they don’t change anything.” (Read more.)

U2.com reveals the new album won’t see the light of day until next year. The band has decided to continue working on the 50 to 60 new songs they’ve written.

Bono: ‘I’m always the one who underestimates how easy it is to simply ‘put out the songs now’, if it was just up to me they’d be out already! But early next year people will be able to start hearing what we’ve been doing. We want 2009 to be our year, so we’re going to start making an impression very early on …’

Up till now many fans had assumed a 2008 release in time for Christmas. Says Bono: “It has to be our most innovative, our most challenging … or what’s the point?”

Q magazine talks to – a very busy – The Edge about U2’s new album. The guitarist sheds some light on the album’s sound and confirms some of the song titles that have floated around the web for some time.

“‘We wanted to give it some variety. There is some dark, heavy stuff but there are also some lighter things. Some we’ve really had to sweat to get and some just came so easily.” Work-in-progress highlights include “f—k-off live rocker” “Breathe”; “For Your Love,” which Edge says is one of his best-ever riffs; and the aforementioned “Get On Your Boots” (“Eddie Cochran with barbershop harmonies”). Other notable tracks include the eight-minute-long “Moment Of Surrender” and “No Line On The Horizon,” inspired by a distortion box called Death By Audio recommended by ex-Secret Machines guitarist Ben Curtis.”

The article suggests the band is still unsure whether to release the album pre- or post Christmas.

Read the full story at U2france.com.

Eamon Carr of Ireland’s ‘Herald’ suggests the first single off U2’s new album – with possible title ‘No Line on the Horizon’ will be called Sexy Boots.