U2 played their first South American show yesterday at Morumbi Stadium in front of an audience of 73,000 wild Brazilians. Bono spoke in Portuguese several times, which charmed the audience. They went nuts when he mentioned the next soccer World Cup: “Copa do Mundo. Vamos buscar o hexa?” “U2 é irlandês, Deus é brasileiro.” Translation: “World Cup, are we going for the sixth cup? U2 are Irish, but God is Brazilian.”

In the middle of the show, a 12-year-old boy is picked by Bono while singing “Miss Sarajevo.” During “Mysterious Ways” and “With or Without You,” a brunette fan danced with Bono, and she stole a very sensual kiss from him at the end. As he did in Mexico, Bono wore a jacket made with the local flag.

U2 will play again tonight at Sao Paulo, and on Friday will attend the Bahia Carnival by invitation of the Brazilian Minister of Culture Gilberto Gil. 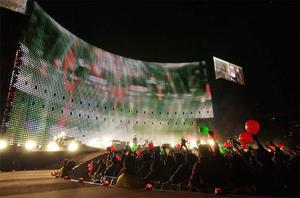