Not to be outdone by Jacknife Lee, U2’s other collaborator Daniel Lanois has a documentary cooking.

This new film, ‘Here Is What Is’ contains footage of Lanois working with Eno and U2 in Morocco, as well as material shot with Emmylou Harris, Garth Hudson, Willie Nelson, Sinead O’Connor and Billy Bob Thornton.

‘Here Is What Is’ premieres at the Toronto Film Festival this September. A preview of the film can be seen on Daniel Lanois’ website. 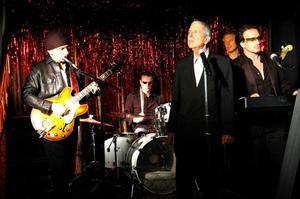 The Edge is heading to the Sundance Film Festival in Park City, Utah, to support Lian Lunson as she premieres her film Leonard Cohen I’m Your Man to an American audience. In her film blog, Lunson writes:

U2 have been so supportive of this project and their participation in the film is beautiful. All the performers are incredible, such a great array of talent.