Great vibes from today’s rehearsals in Turin. First of… B’s deffo in the house now. Continue if you want to hear what U2’s been cooking.
END_OF_DOCUMENT_TOKEN_TO_BE_REPLACED

Again, don’t listen to these rehearsal video’s if you don’t want to be spoiled for U2’s tour.

END_OF_DOCUMENT_TOKEN_TO_BE_REPLACED

Don’t watch (well… listen, as there isn’t much to see) this video if you want to remain unspoiled for the songs rehearsed for U2’s 360 tour.

END_OF_DOCUMENT_TOKEN_TO_BE_REPLACED

At the start of the first of five rehearsal shows in Dublin’s Olympia Theatre, R.E.M.’s Michael Stipe mentions various people among which Bono and The Edge. He thanks the pair for ‘keeping him grounded’. U2’s singer and guitarist both attended the show.

R.E.M. is currently recording a new album in Dublin. The band is using these shows to try out the new songs they have been writing. Fans report the new songs have an old school – Fables/Document era – feel.

Reported working titles: Horse to Water, Living Well ‘s the Best Revenge, Tomorrow, Staring down the barrel of the middle Distance, On the Fly, Until the Day is Done, Mr. Richards.

RTE 2FM’s Gerry Ryan spoke to Bono, The Edge and Paul McGuinness shortly after the band got off stage in San Diego. U2’s manager was scheduled to speak to the Irish DJ, but Bono and The Edge weren’t. When they heard McGuinness was about to do the interview they told their manager ‘we want to talk to Gerry’.

RTE have put the entire interview online. Listen to it in Real Audio, or continue reading. (Unable to record we interpreted our notes taken during the interview.)

McGuinness took the call, said it was their ‘best ever opening night’ then started to laugh because ‘a half naked man’ had entered his room. Bono took the phone and said that for Gerry Ryan he would go fully ‘nekkid’.

Bono seemed high on energy, a bit delirious, said it had gone ‘fantastic’. He gave a report in a Jack Charlton accent, using football jargon as if he were reporting on an Irish team game, something like ‘the team gave 110%’.

END_OF_DOCUMENT_TOKEN_TO_BE_REPLACED 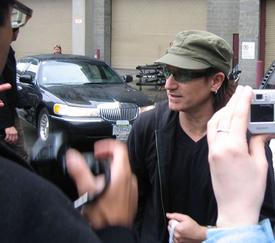 Reader Morgan Uren reports about 30 fans who were waiting outside Vancouver’s GM Place got a treat Saturday afternoon when Bono and Edge visited with the fans after U2’s rehearsal at the venue. According to Morgan, Bono and Edge greeted each of the fans individually, and Bono — like a campaigning politician — kissed one fan’s baby before the band departed.

Thanks to Morgan for sharing her photos.