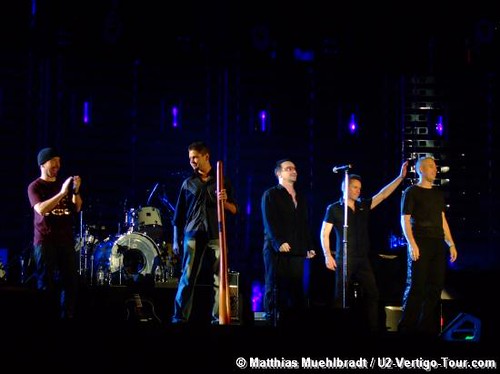 U2 played their first show of the 5th leg of the Vertigo Tour on Tuesday night in Brisbane. The Aussies were treated to the following setlist:

City of Blinding Lights / Vertigo / Elevation / Until The End Of The World / New Years Day / Beautiful Day / Yahweh / Walk On / Sometimes You Can’t Make It On Your Own / Love And Peace Or Else / Sunday Bloody Sunday / Bullet The Blue Sky / Miss Sarajevo / Pride / Where The Streets Have No Name / One / encore: Zoo Station / The Fly / With Or Without You / The Saints Are Coming / Angel Of Harlem / Kite

U2 have arrived in Queensland, Australia and set up camp in a reportedly ‘stupid expensive’ hotel on the Gold Coast. While their crew continues to work on getting the venue ready for the show, the band will take a few days to acclimatise. Bono told the press: “I don’t really feel like Bono at the moment, I looked in the mirror and saw a little man with sunken eyes.”

Their Denton interview from March this year is going to be repeated on Monday and the band will appear on Rove on Tuesday night.

The stage in Brisbane is almost fully set up.

We haven’t had any info yet on how GA lines are going to be handled. Aussie fans, we welcome your reports and tips.

Meanwhile, Billboard publishes the U218singles track list, including the new song ‘Window in the Skies’, and U2place.net has what might be the album sleeve.

END_OF_DOCUMENT_TOKEN_TO_BE_REPLACED

The performance will air live on ESPN, as well as be streamed on the Westwood One World Network and Rhapsody.com. A download of “The Saints Are Coming” will be sold at Rhapsody.com to benefit Music Rising, an organization founded by Edge that aims to help musicians replace the instruments lost in Hurricane Katrina.