Maybe this will tell us where these stages will be built in 2010:

U2360 tour architect Mark Fisher & his team at Stufish have come up with a 3d model of all three U2360 stages (Red, Green and Blue), which will be placed in all stadiums the band are playing in this tour (in Google Earth that is…).

Check this site to see if your stage is already built and if you get to see the green, red or blue ‘steel’. 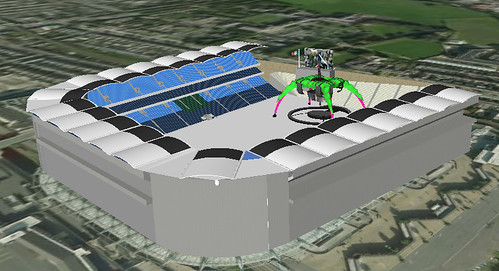 Cool sequence of webcam pictures of the stadium in Gelsenkirchen, Germany where U2 are playing on August 3.

Bart the Unstoppable has been back for another round of picture-taking at StageCo. He had a talk with a StageCo employee, who was able to confirm what U2log.com had learnt from a different source earlier: Production in Barcelona starts on the 15th.

Furthermore, Bart has learnt that as rumoured, the tour will last two years and that the band will be back in Europe next year, and are 99% certain to tour South America.

The 27-meters-high towers visible in Bart’s pictures are for lifting and taking down the claw, which itself is 50 meters high. There will be no towers during the show. It takes four days to build the claw, and two to set it up for production.

Guess what… sheets will cover the the claw and they arrived in Belgium today where they will be tested this week. Contrary to Bart’s earlier report the claw will be lifted one more time in the next ten days. This is only one of three claws. The other two have not yet been built, they will be constructed and improved upon using what they’ve learnt from setting up the first.

Claw #1 will be used in Barcelona, Gelsenkirchen, two of the UK shows and Paris. It will be the hardest to work with because of its prototype-status.

Bart concludes that the gray-ish coloured loose part sitting around in the pictures are the claw’s legs. The screen used in the show will be tested at Sportpaleis Antwerp. The engines used in the towers to erect the claw come from Spain, and sound is being tested in Dublin, making this quite the pan-european production.

Thank you, Bart, for some excellent investigative journalism!

Our Belgian friend Bart has had another look around the StageCo property in Werchter and he has added more pictures of U2’s U2360 tour rigging to the collection we featured a few days ago. Bart reports that U2’s ‘Claw’ is no longer there and he’s heard that testing of the stage will continue in parts (they will not be erecting the entire stage again) for the next 10 days, after which everything will be shipped to Barcelona for the first show of the European leg of the U2360 tour. U2log.com has learnt that the actual production of the shows commences on the 15th.