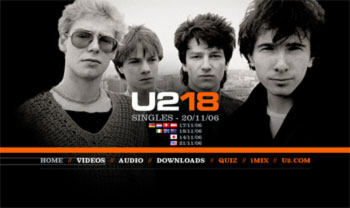 A website promoting U2’s upcoming ‘best of’ release, U218, has gone live at u218.com, offering wallpapers, videos and previews of the album as well as a lengthy quiz to test your knowledge of U2 trivia. And if you can’t live with the album’s running order or choice of songs, you’re invited to share your own dream track list on the ‘imix’ section of u2.com’s Zootopia forum.

In a bid to retain their many subscribers after their first full membership year, U2.com are offering an ‘exclusive’ CD/CD-ROM double disc set called ‘U2 Communication’ to current members, and an additional 20% discount on the $40 subscription fee.

The CD’s exclusivity is debatable, since the 8 tracks are taken from the current Vertigo live DVD which many U2.com subscribers are likely to have acquired. It looks rather sexy, though, and this fan has already succumbed to its lure.

The offer was made via a U2.com mail shot which was sent out this Tuesday.

From the e-mail: This package, which will not be available at retail, contains an 8-track CD featuring songs recorded live during the Vertigo Tour; and a CD-ROM containing an interactive audio player, an exclusive live video clip from U2’s Vertigo 2005 show at Milan’s San Siro stadium, as well as wallpapers and U2 screen savers using the show’s amazing imagery.

U2.com staff further apologise for the 2005 ticket snafu and state they continue to look into fair ways to distribute tickets to fans. They stress however, that the subscription renewal does not include any distribution solution or any guarantee of tickets to future shows. No change there, then. Boom boom.