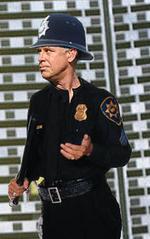 The August issue of Wired features William Gibson’s view on U2’s Vertigo tour. Very interesting read, going into some behind the scenes detail on build up, lightning, travel and other things. Snippets of conversation with band members, as well as Willie Williams and other people on the band’s touring staff.

“Someone I met in a Dublin pub opined that if U2 hadn’t become the biggest rock act in the world, Adam Clayton might have become a policeman, Larry Mullen would have been the bohemian sort Clayton was perpetually chasing around town, Edge would have become an AI researcher, and Bono – well, it was impossible to imagine what Bono would have done if he hadn’t gotten the job of being Bono.”