The BBC is blogging from the World Economic Forum in Davos. Their reporter Tim Weber mentions tight security on site:

‘Without a badge, you won’t get far here. For some, though, the staff might be tempted to make an exception. But they don’t. As I rush out of the conference centre to go to a briefing, Bono walks up and as he is without a bag or other accessories, he tries to jump the queue at the x-ray machine. But he is turned back firmly by a security guard. Just as she does so, she hesitates. “Bono?”, she asks. He nods. She smiles – but points him to the badge reader regardless.’ 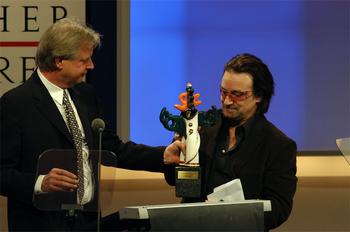